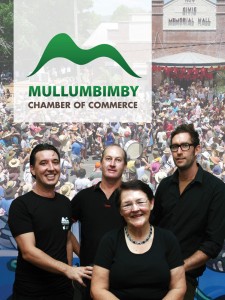 The Mullumbimby Chamber of Commerce commenced its second year, welcoming a new executive committee at this year’s AGM.

The new executives were Dean Stanford of Mullumbimby Newsagency as President and Trent Morris of Rock n Roll Coffee Company as Vice President.

The Secretary and Treasurer positions were filled by Mullum Mac’s Obi McDonald-Saint and Margaret Hatch of Mooyabil Farm Holidays respectively.

Jeannette Martin of Mullumbimby Community Gardens and David Piesse of Keep It Local were elected as executive members while Janelle Stanford took on the role of Public Relations and Sue Walker the task of Minutes Secretary.

Following a robust discussion at the AGM, the Chamber, made up of more than 50 businesses and community organisations, formalised its plans for developing and growing Mullumbimby businesses and the community in general.

“We don’t want to be seen as a Chamber that has only the business interests at heart,” Chamber president Dean Stanford said.

“We have a very vibrant and supportive community in Mullumbimby and this is the major contributor to Mullumbimby’s business success.”

Some of the plans include a sculpture walk along Mullumbimby’s bike paths, showcasing the artistic talent of the area, organising a community festival for later in the year, and providing free wireless internet to the centre of Mullumbimby.

The Chamber is also rolling out a branding campaign to promote Mullumbimby to both a local audience as well as visitors to the area.

If you run a local business or community organisation and would like to join the Chamber or would like more information about the services the Chamber provides, please contact the Secretary Obi McDonald-Saint on 0410 189 664 or email secretary@mullumbimby.org.au.